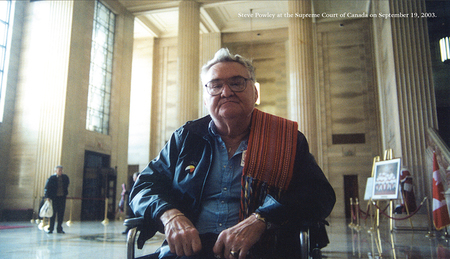 The Historic Sault Ste. Marie Métis Council (HSSMMC) has been awarded $200,000 from the Museum Assistance Program - Indigenous Heritage Grant, funded by the Government of Canada. The funds will be used to create a permanent exhibit at the Sault Ste. Marie Métis Cultural Centre, a travelling exhibit, and a documentary to commemorate the twentieth anniversary of the Powley decision on September 19, 2023.

We are excited to see this important project unfold and whole-heartedly congratulate everyone at the Historic Sault Ste. Marie Métis Council! 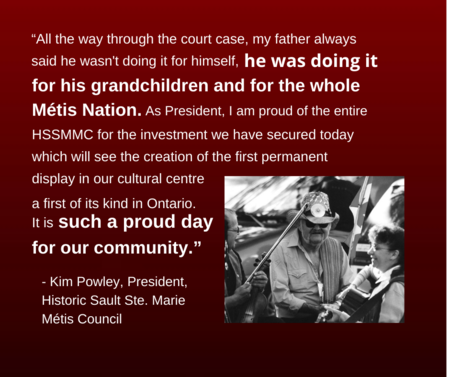 The Historic Sault Ste. Marie Métis Council, with support from Know History Inc., has been awarded $200,000 from the Museum Assistance Program - Indigenous Heritage Grant, funded by the Government of Canada. The program supports projects that preserve, manage, and present Indigenous cultural heritage.

In 1993, Steve and Roddy Powley were charged for hunting a moose without a licence, and unlawful possession of a moose contrary to the Ontario Game and Fish Act. The Powleys and the Métis Nation of Ontario took the case to court, arguing that, as Métis, Steve and Roddy Powley had Aboriginal harvesting rights that are enshrined in Section 35 of the Constitution Act. After several appeals, the Supreme Court of Canada unanimously ruled in favour of the Powleys in 2003, confirming the existing rights of Métis people under Section 35.

The new exhibit will commemorate this victory by showcasing artifacts like Steve Powley’s hat, sash and hunting notebook, the rifle presented to Steve Powley by Manitoba Métis Federation President David Chartrand, the original copy of the Powley Decision, and the hide from the first moose “legally” harvested by the Métis community after the 2003 ruling. The exhibit will give these and other irreplaceable items a permanent home, where they can be viewed and enjoyed by visitors and community members.

The permanent exhibit will be housed at the Sault Ste. Marie Métis Cultural Centre. The Cultural Centre is one of the three buildings in the former St. John’s Anglican Church Complex which was gifted to the Historic Sault Ste. Marie Métis Council in 2017 by the Anglican Diocese as an act of “tangible reconciliation” in recognition of the existence of a Métis burial ground on the site. The former church is being converted to a cultural centre/museum, the church hall into a community meeting space and the rectory to a program and service hub for Métis Nation of Ontario citizens. The program and service hub will open to citizens in early November, with significant renovations having been recently completed.

A short documentary and a travelling exhibition will also be created and circulated across Canada, in order to share this important story with as wide an audience as possible. The documentary and both exhibits will launch on September 19, 2023, to celebrate the 20th anniversary of the Powley Case.

“All the way through the court case, my father always said he wasn't doing it for himself, he was doing it for his grandchildren and for the whole Métis Nation. This commemorative project will look back on all that has been accomplished in these past 30 years since my father and brother shot that moose and in the 20 years since we won the case. As President, I am proud of the entire HSSMMC for the investment we have secured today which will see the creation of the first permanent display in our cultural centre which is being developed by the HSSMMC - a first of its kind in Ontario. It is such a proud day for our community.”

“The Sault Ste. Marie Métis community have been leaders for generations, and that continues today. With the development of the cultural centre, as a first of its kind in Ontario and with this funding being announced today, this community is leading again, this time leading in telling the story of this community and the ways that the Powley Case has benefitted the entire Métis Nation. As Regional Councillor for this community, I was proud to be asked by the HSSMMC to work with them to prepare this proposal and secure this federal investment into our community.”

“When we took on the case in 1993, we knew we were in for a tough fight, but we prevailed because we stood together. Our family, this community, the Métis Nation of Ontario and all the Métis governments in western Canada stood with us. We succeeded because we stood together. This commemoration project will establish a permanent exhibit which will tell the story of what we can accomplish when we as Métis people stand together. I want to thank Heritage Canada for this funding support which will allow our community to tell our story”

“The Hunt for Justice led by the Métis Nation of Ontario, the Powley Family and the Sault Ste. Marie Métis community ultimately led to Canada’s 2003 watershed Supreme Court of Canada decision affirming Métis rights. Since that time, the MNO and Métis governments across the Métis Nation Homeland have relied on the Powley decision to continue to advance rights and claims, including our inherent rights to self-determination and self-government. This project commemorating the Métis victory in Powley will help to ensure that our people, and all Ontarians, will hear the story of the Historic Sault Ste. Marie Métis community.  These are inspiring stories—stories of rights and resistance, and the resilience of the Métis. It is projects like this one that will help to educate Canadians, and advance the spirit of reconciliation in Canada.”